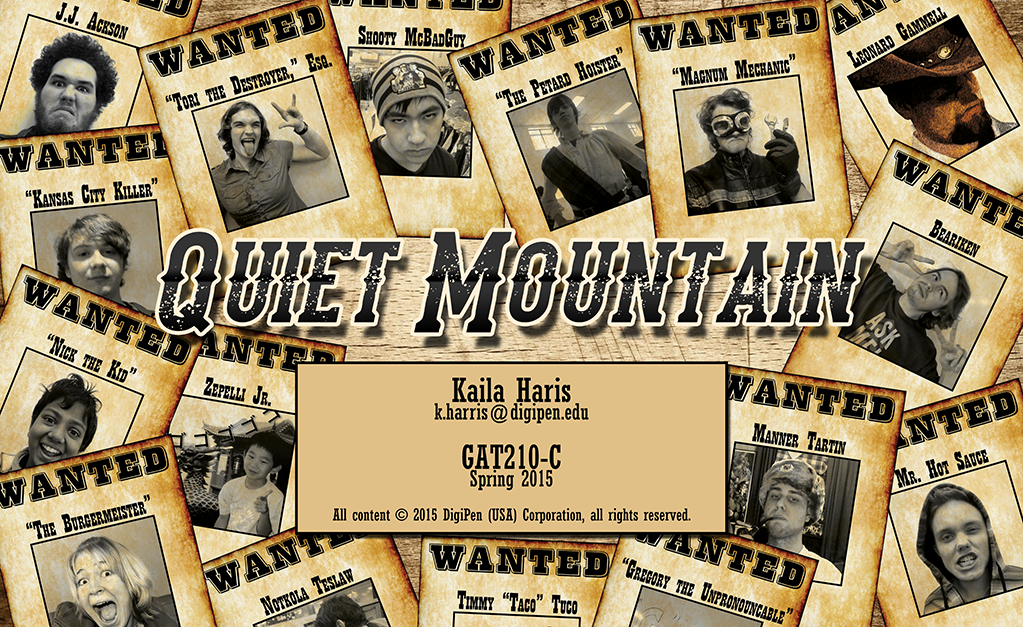 This game has a special place in my heart. Not only do I love westerns, but creating this project involved a lot of help from my friends in a slightly unusual way.

So for context, I worked on this during my Freshman as a DigiPen student for a gameplay mechanics class. The two previous games I’d made for this class had fire and water for themes, so this one had to be “earth” or “air”. I decded that it had to be a western set in the mountians. (See? Using that earth theme like a boss.) I immediately knew I wanted to do a deputies vs outlaw thing. But what I had in mind was a little ambition. There was one major problem: art production.

I had a month to put this thing together and would need at least a dozen fake wanted posters. Luckily, there was a quick solution. I asked my instructor, “Hey, are there any rules against me using pictures of people in my game? Like, other DigiPen students?” Turns out there wasn’t, but he was concerned that the art style wouldn’t be consistent or thematic. I went ahead with it anyway because I wasn’t shooting for period accuracy. Plus, I had an idea on how to make the look cohesive and I didn’t want to spoil the surpise (if it worked).

So I asked my friends if they wanted to be outlaws and commit heinous crimes for my amusement. All they had to do was submit a picture and write what crime they were wanted for on the right-to-use waiver. I had placeholder posters for testing while submissions came in, which also helped my friends convince their friends and roommates to join in. (Didn’t get to use all the submissions unfortunately.)

The results were better than I could have hoped for. Everyone was super excited to arrest their friends or get arrested during playtests. An over-the-top arm wrestling match even broke out in the rec room when two of them noticed a one point difference in their rankings. (A vending machine got involved so they wound up deciding it with several rounds of rock-paper-scissors.)

I’m glad I made that game the way I did when I did. I wound up meeting a lot of good friends while making this project and it taught me a lot about engaging players in ways other than general gameplay mechanics.

For more information on how I put this game together, see the following documentation: